This vessel is exceptional to say the least~her owner has kept her with an open checkbook, making sure that she is in immaculate condition.

An extensive marine survey was completed and is available for review. You will not be disappointed.

Welcome aboard this 2005 Yellowfin 34 Center Console; she has undergone an extensive refit by Yellowfin in 2017 and features many upgrades unlike any other.  Her hull was painted Ice Blue, she has new fuel tanks, and new 2017 white Yamaha F300 engines with custom 3D Yamaha raised lettering.

The electronics are Raymarine-she has 2 displays with a 1kw through- hull transducer and a Raymarine 72 mile HD Digital open array radar. She also has two Icom VHF radios in the hard top with two 8ft antennas.

She has a completely custom sound system, featuring a Fusion head unit with JL audio amps and speakers. A total of eight 10 inch subwoofers and two 6.5 inch speakers; all powered by two 600/1 sub amps and two 600/6 high amps.

The boat also features LED underwater lights, LED color changing lights under the gunnels as well as in the hardtop. Forward of the radar on the hardtop is a Black Oak 30″ LED light bar.

The boat also features a freshwater washdown; with a total of 2 livewells, one aft and one midship, and a coffin box.

The hardtop has outriggers along with a center rigger and reel colors with 10″ teaser reels.

This boat is ready to fish; if you are in the market for a vessel that has undergone extensive upgrades and has been taken care of by a meticulous owner, then look no further!

Zach leveraged his technology background and mixed it with his passion for boats to create yellowfinboatsforsale.com. Now potential buyers shopping for a Yellowfin boat have the ultimate resource to find the perfect platform. 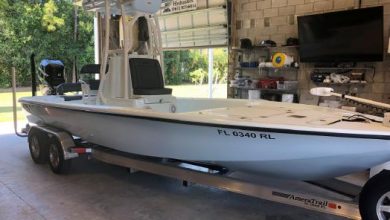 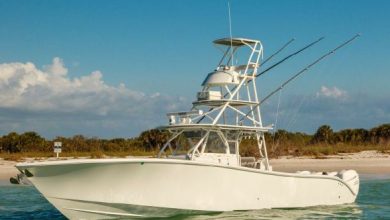 Are You Protected On The Water?